28 December 2010 – Dagupan City. In a solemn celebration presided by the Papal Nuncio to the Philippines, Archbishop Edward Joseph Adams, the formal transfer of the Episcopal Seat and the establishment of the Cathedral Church of the Archdiocese of Lingayen-Dagupan was held on 27 December 2010, the Feast of St. John, the Apostle.

The Papal Nuncio was formally received at the doors of the cathedral by Msgr. Rafael S. Magno, Jr. Msgr. Magno is the present Parish Priest of the St. John the Evangelist Parish. The simple rite of reception consisted in Msgr. Magno offering a crucifix to the Archbishop Adams. The Papal Nuncio kissed the crucifix and sprinkled holy water to those present after blessing himself with it.

Msgr. Socrates B. Villegas, DD, the Archbishop of Lingayen-Dagupan welcomed the Papal Nuncio during the Mass.

Letter from the Holy See 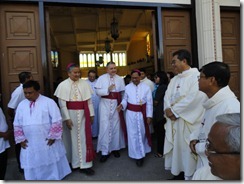 Archbishop Socrates B. Villegas, DD wrote the Holy See asking for the formal transfer of the Episcopal Seat and the Cathedral church from the church on Zamora St. to the church on Burgos St.

The Holy See responded favorably to the request of Archbishop Villegas. The letter of the Holy See was read by Msgr. Rafael S. Magno, Jr., the Vicar General and Chancellor of the Archdiocese. He first read the letter in Latin, then the English translation. After the reading, the congregation made an acclamation with the clapping of hands, while the choir sang  George Frideric Handel’s composition, “Messiah”, consisting of only the first of the oratorio's three parts, the "Hallelujah".

The retablo of the cathedral was lit as well as the festive lighting of the chandeliers. Butterflies were released from the back of the lit retablo. At the same time, twenty four laymen and women representing the parishes of the Archdiocese of Lingayen-Dagupan went to the twelve consecration  crosses on the twelve pillars of the cathedral. There were two lay persons assigned per cross: one lighted the candle while the other hang flowers under the consecration crosses. The twelve crosses refer to the apostles and the completeness of discipleship. These crosses, permanently a part of the church, mark visibly that this church has been solemnly dedicated and consecrated and, are thus called the consecration crosses.

Blessing of the Archbishop’s Cathedra

The Papal Nuncio afterward went in front of the cathedra, and prayed the blessing for the Archbishop’s Cathedra. 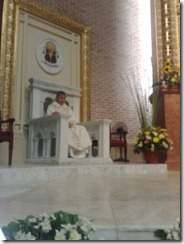 A cathedra (Latin, "chair", from Greek, kathedra, "seat") is the chair or throne of a bishop. It is a symbol of the bishop's teaching authority in the Roman Catholic Church. A church into which a bishop's official cathedra is installed is called a cathedral.

In the prayer of blessing, the Papal Nuncio prayed that the Lord Jesus Christ “grant that those who preside from this chair will proclaim God’s word ardently and celebrate the sacraments rightly, so that, with the people entrusted to their care, they may come before the seat of God’s majesty.”

The People of God

The Cathedral of St. John the Evangelist was filled by so many of the faithful from the different parishes of the Archdiocese. There were eight bishops who attended the celebration, besides Msgr. Renato P. Mayugba, DD, the Auxiliary Bishop of Lingayen-Dagupan. These were: Most Rev. 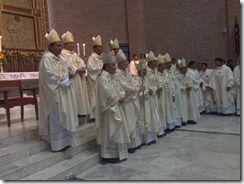 The celebration was attended by different government officials of the province and of the City of Dagupan, led by Mayor Benjamin S. Lim.

A simple dinner was tendered by the Archdiocese of Lingayen-Dagupan in honor of the Papal Nuncio after the celebration at the Archbishop’s Residence. 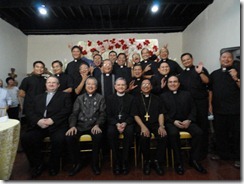 Some priests of the Archdiocese of Lingayen-Dagupan with Msgr. Socrates B. Villegas, DD, Msgr. Renato P. Mayugba, DD with Archbishop Joseph Edward Adams and his staff.