The staff of the Parish of St. Fabian, Pope and Martyr, attended a recollection last 27 March 2009, intended solely for the parish workers and personnel of the different parishes of the archdiocese . The recollection was a request from the priests who noted the need for their staff and personnel to undergo spiritual formation. The one-day recollection was held at the Lay Formation Center of the Archdiocese. Fr. Mario Dominic C. Sanchez facilitated the recollection.

The Recollection is highlighted by three conferences on life, God and happiness. The Sacrament of Reconciliation and the Eucharist were the culminating activities. 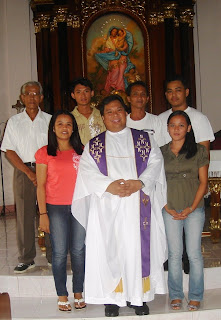 Photos courtesy of LFC.
Posted by frbarats at 6:36 PM

In a circular letter addressed to the parish priests and chaplains of the Archdiocese of Lingayen-Dagupan, Msgr. Renato P. Mayugba, DD, the Auxiliary Bishop, issued an invitation to the devotees of the Divine Mercy to the 2nd Archdiocesan Congress on The Divine Mercy. In his letter, the bishop, to show the significance of the octave of Easter, wrote that “on the octave of Easter, Christ appeared again to the eleven and, calling the attention of Thomas, showed his wounds that wrought our redemption”.

The program will have three major talks on the Divine Mercy. The first talk on "Divine Mercy in Scriptures" will be given by Fr. Oliver E. Mendoza. "Pastoral Implications of the Divine Mercy Devotion" will be shared to the participants by Most Rev. Jesus A. Cabrera, DD. The third talk on "Celebration of God's Mercy " will be given by Most Rev. Renato P. Mayugba, DD who will also celebrate the Mass on that day at the Parish Church of St. Thomas Aquinas.

The message and devotion to Jesus as The Divine Mercy is based on the writings of Saint Faustina Kowalska, an uneducated Polish nun who, in bedience to her spiritual director, wrote a diary of about 600 pages recording the revelations she received about God’s mercy. Even before her death in 1938, the devotion to The Divine Mercy had begun to spread.

St. Faustina, the Secretary of Mercy

St. Faustina has been called the “Secretary of The Divine Mercy”. On October 5, 1938, Sister Faustina (Helen Kowalska) died in a convent of the Congregation of Sisters of Our Lady of

Mercy in Cracow, Poland. She came from a very poor family that had struggled hard on their little farm during the terrible years of WWI. Sister had had only three years of very simple education. Hers were the humblest of tasks in the convent, usually in the kitchen or the vegetable garden, or as a porter.

On February 22, 1931, Our Lord and Savior Jesus Christ appeared to this simple nun, bringing with Him a wonderful message of Mercy for all mankind. Saint Faustina tells us in her diary under this date:

"In the evening, when I was in my cell, I became aware of the Lord Jesus clothed in a white garment. One hand was raised in blessing, the other was touching the garment at the breast. From the opening of the garment at the breast there came forth two large rays, one red and the other pale. In silence I gazed intently at the Lord; my soul was overwhelmed with fear, but also with great joy. After a while Jesus said to me, 'paint an image according to the pattern you see, with the inscription: Jesus, I trust in You.'"

Some time later, Our Lord again spoke to her:

"The pale ray stands for the Water which makes souls righteous; the red ray stands for the Blood which is the life of souls. These two rays issued forth from the depths of My most tender Mercy at that time when My agonizing Heart was opened by a lance on the Cross....Fortunate is the one who will dwell in their shelter, for the just hand of God shall not lay hold of him."

The Second Archdiocesan Congress on The Divine Mercy

The theme of the 2nd Archdiocesan Congress is “The Flames of Mercy are burning!” It is a proclamation of the unfathomable mercy of Jesus on the whole world, and the need for us to propagate the message and devotion of the Divine Mercy. It also will help the devotees in the proper celebration in the parishes of the Divine Mercy Sunday which will be celebrated this year on 19 April 2009, the First Sunday after Easter.

28 March – San Fabian. As part of the continuing restructuring of the Archdiocesan Social Action Apostolate (ASAP) of Lingayen-Dagupan, the Vicariate III (Queen of the Most Holy Rosary) held a meeting of all the members of the different parish social action apostolates. It was held at the Parish Center of the Parish of St. Fabian, Pope and Martyr. 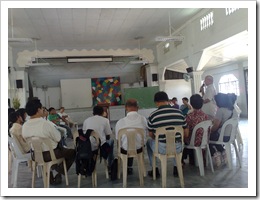 22 March – San Fabian. The “Divine Mercy Newsletter” is already out for distribution and for reading by the devotees. The newsletter is a publication of the Apostles of the Divine 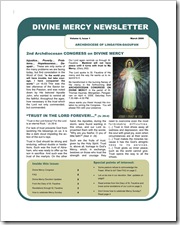 Mercy of the Parish of St. Thomas Aquinas, Mangaldan, Pangasinan. It is being distributed however for the whole Archdiocese. It usually comes out before Holy Week, and in time for the celebration of the Feast of Mercy on the first Sunday after Easter. This year, the Feast of Mercy is celebrated on April 19.

To download and read the Newsletter, kindly click the link: Divine Mercy Newsletter Vol.4,1 It is in the .pdf format.

Lay Ministers’ Recollection at the LFC

22 March – San Fabian. The Lay Eucharistic Ministers and the Lectors/Commentators of the Parish had their annual recollection at the Lay Formation Center last 21-22 March 2009, respectively. The recollection is part of the continuing formation program of the lay ministers in a directive by Archbishop Oscar V. Cruz, DD contained in his circular (Circular Letter 4, Series 2009).

Rev. Frs. Mario R. Morales and Mario Dominic C. Sanchez facilitated the recollection. It was held at the Lay Formation Center of the Archdiocese. 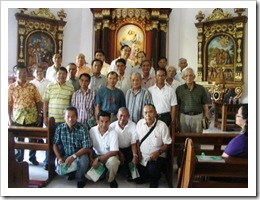 Lay Eucharistic Ministers of the Parish of St. Fabian, Pope and Martyr 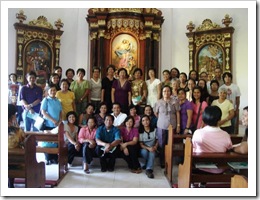 Lectors and Commentators of the Parish of St. Fabian, Pope and Martyr

Bro. Estephen Espinoza assigned in the Parish of St. Fabian, Pope and Martyr

22 March – San Fabian. Bro. Estephen Espinoza, a seminarian of the Archdiocese of Lingayen-Dagupan, has been assigned in the Parish of St. Fabian, Pope and Martyr. Bro. Estephen hails from Lingayen, Pangasinan.

He finished his High School studies at the Mary Help of Christians High School Seminary. He obtained his AB Philosophy at the Mary Help of Christians College Seminary, Bonuan Gueset, Dagupan City. He finished his Theological studies at the Immaculate Conception School of Theology, Vigan, Ilocos Sur. Bro. Estephen is staying in the parish as part of his continuing formation to the priesthood. He arrived in the parish last March 14.

Email ThisBlogThis!Share to TwitterShare to FacebookShare to Pinterest
Labels: news and events

The Flames of Mercy are Burning!

21 March-San Fabian. The 2nd Archdiocesan Congress of the Divine Mercy has been scheduled on 4 April 2009, Saturday. The St. Thomas Aquinas Parish of Mangaldan, Pangasinan is the host of the congress. The theme of the congress is “The Flames of Mercy are Burning”, taken from the Diary of St. Faustina, when Jesus spoke to her with these words:

My daughter, speak to priests about this inconceivable mercy of Mine. The flames of mercy are burning Me-clamoring to be spent; I want to keep pouring them out upon souls; souls just don't want to believe in My goodness. (Diary, 177)

The First Archdiocesan Congress of Divine Mercy was celebrated last 21 June 2008 at the Parish of St. Fabian, Pope and Martyr. During that congress, there were about 600 devotees who took part in the said congress. Majority of the

delegates came from the host parish of St. Fabian and the neighboring parish of St. Thomas Aquinas Parish in Mangaldan, Pangasinan. These two parishes have the most number and active devotees of the Divine Mercy.

It is expected that more devotees and parishes will take part in the second congress. Three talks are to be shared during the day: Divine Mercy in Scriptures by Rev. Fr. Oliver E. Mendoza, Divine Mercy Spirituality by Most Rev. Jesus A. Cabrera, DD and Divine Mercy and the Church by Most Rev. Renato P. Mayugba, DD. Registration starts at 7:30 AM. The program and activities will end by 4:30 PM. Participants are advised to bring their baon.

The Logo of the 2nd Archdiocesan Congress on Divine Mercy 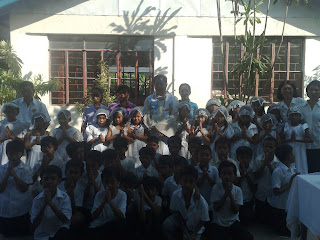 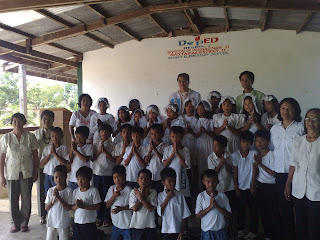 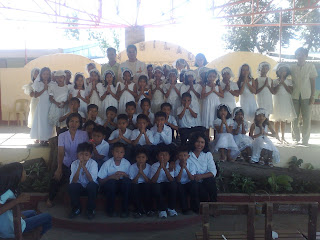 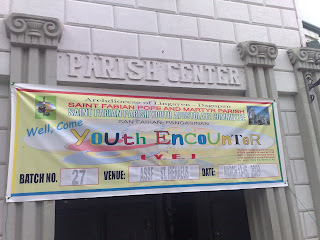 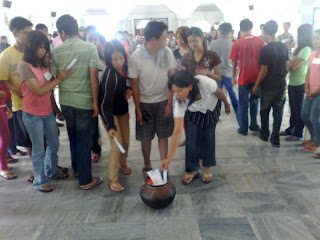 Graduating Fourth Year students of the Archdiocesan School of San Fabian in one of the activities of the Youth Encounter weekend seminar. 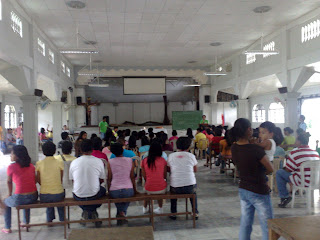 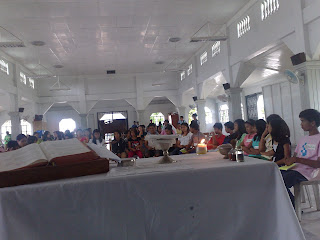 The participants in a mass celebrated by Rev. Fr. Oliver E. Mendoza, Parish Priest and Director of ASSF.
Posted by frbarats at 4:53 PM 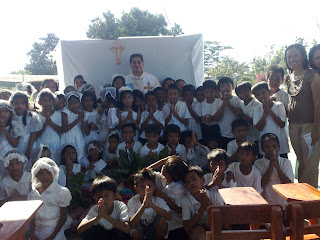 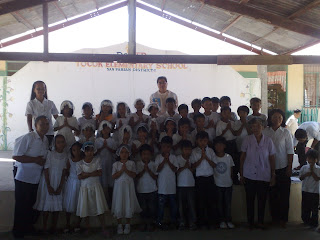 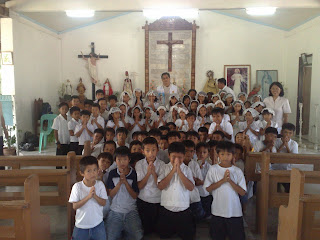 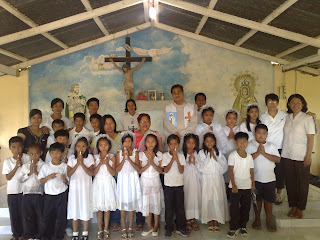 First Communicants of Brgy. Lipit-Tomeeng with the Catechists

San Fabian - 5 March. The Parish of St. Fabian hosted the regular meeting of the Board of Directors of the Northern Luzon Commission on Biblical Apostolate last 2 March. The meeting formally opened at 2:00 in the afternoon. It was presided by Msgr. Renato P. Mayugba, DD, the Auxiliary Bishop of Lingayen-Dagupan, and the Regional Chairman of the Biblical Apostolate. It lasted until about 7:00 PM.

The Northern Luzon Commission on Biblical Apostolate is one of the many commissions established by the bishops of Northern Luzon. Northern Luzon is composed of three Archdioceses, and eleven dioceses. The NLCBA is the coordinating body of the biblical apostolate.

The meeting was attended by the different Biblical Directors of the dioceses together with their Lay Coordinators. Representatives from the Philippine Bible Society were also presetn. One of the things discussed was the program of the Episcopal Commission on Biblical Apostolate to give one bible to every Filipino family in the whole country. 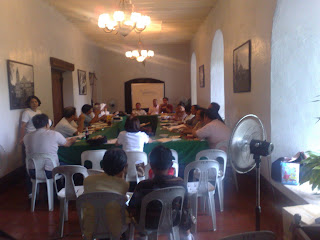 The Northern Luzon Commission on Biblical Apostolate had their meeting at the hallway of the Catholic Rectory of the Parish of St. Fabian, Pope and Martyr
Posted by frbarats at 8:04 AM

San Fabian - 2 March. The Liturgical Greeters or more popularly called the Usherettes and the "Colecta" team attended a one-day Recollection at the Lay Formation Center of the Archdiocese of Lingayen-Dagupan last 1 March, Sunday.

The recollection given to the group is part of the Formation Program being followed by the Archdiocese of Lingayen-Dagupan which is given to the different members of the Parish Ministries which include, besides the Liturgical Greeters, the collecta teams, the members of the Parish Choirs, the Lectors, Commentators and the Lay Eucharistic Ministers. This was contained in a Circular Letter (Series 2009, No. 4) signed by Archbishop Oscar V. Cruz, DD in a directive to the clergy of the Archdiocese. 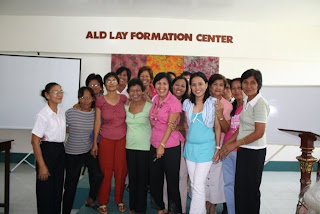 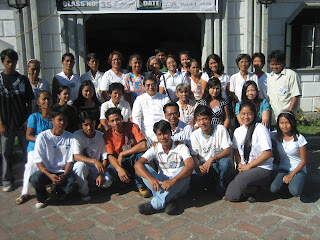 San Fabian -2 March. Parish Renewal Experience (PREx) Class 35 was recently held at the Parish Center last 27 February to 1 March. There were 30 graduates of this class coming from the different communities and barangays of the parish like Barangays Lipit-Tomeeng, Sobol, Cayanga, Sagud Bahley, Nibaliw Center, Anonang, Tempra-Guilig. Class 34 sponsored the weekend seminar. Chosen as the Class Coordinator was Sis. Fina I. Ibasan of Nibaliw West and the Assistant Coordinar was Bro. Roberto A. Ymana of Barangay Sobol. 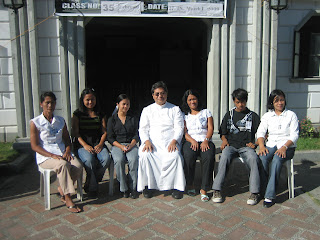 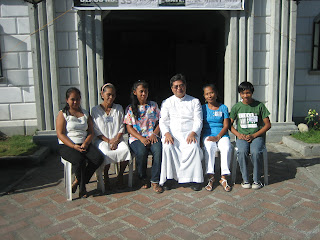 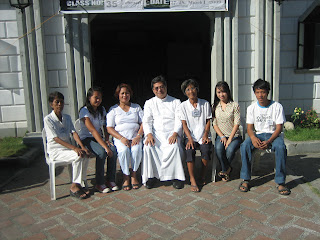 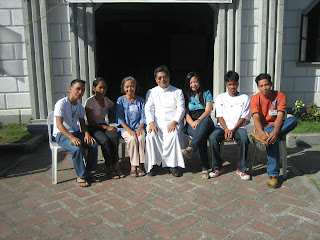 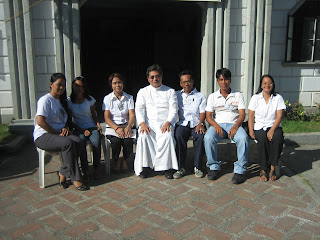 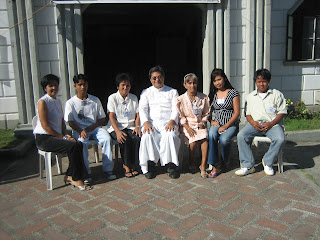 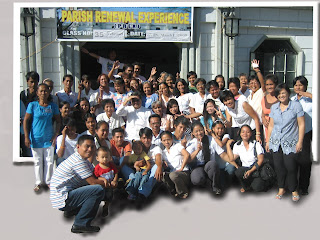 Parish Renewal Experience (PREX) of the Parish of St. Fabian, Pope and Martyr