Mission 143+44: The On-Going Project for the Reconstruction of the Retablo

The old Retablo of the Parish of St. Fabian, Pope and Martyr, San Fabian, Pangasinan.

Start of the reconstruction of the retablo: 10 October 2011.

The replastering of the entire surface of the concrete structure (of the reablo).

Taken on 10 November 2011, a month after the project was started.

23 November 2011. The priming of the concrete surface of the retablo.

25 December 20122, taken after the Christmas Mass in the morning.

The renovation of the concrete main retablo continues...

28 December 2011-San Fabian, Pangasinan. The paper mache Nativity Scene and Christmas parol were designed and made by Ms. Josie Garcia. 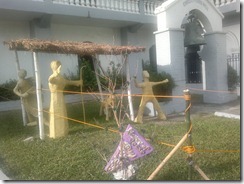 “And there were shepherds living out in the fields nearby, keeping watch over their flocks at night. An angel of the Lord appeared to them, and the glory of the Lord shone around them, and they were terrified.  But the angel said to them, "Do not be afraid. I bring you good news of great joy that will be for all the people.” (Luke 1, 8-10) “When the angels had left them and gone into heaven, the shepherds said to one another, ‘Let's go to Bethlehem and see this thing that has happened, which the Lord has told us about.’
So they hurried off and found Mary and Joseph, and the baby, who was lying in the manger”. (Luke 1, 15-16) 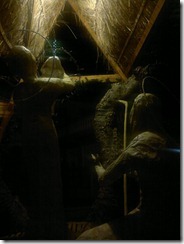 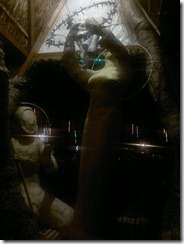 While they were there, the time came for the baby to be born,
and she gave birth to her firstborn, a son. She wrapped him in cloths and placed him in a manger, because there was no room for them in the inn. (Luke 1, 6-7) 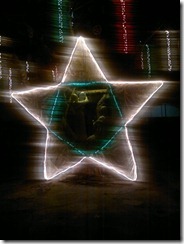 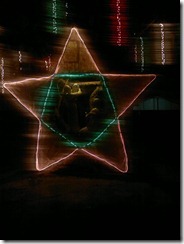 “They went on their way, and the star they had seen in the east went ahead of them until it stopped over the place where the child was. When they saw the star, they were overjoyed. On coming to the house, they saw the child with his mother Mary, and they bowed down and worshiped him. Then they opened their treasures and presented him with gifts of gold and of incense and of myrrh. (Matthew 1, 9-11) 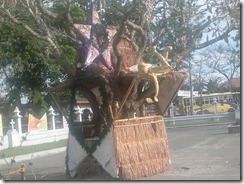 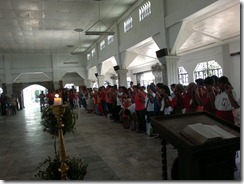 Communities (BECs) of the Parish of St. Fabian, Pope and Martyr, gathered together for a one-day celebration of prayer, unity and fun at the Parish Center, a day after Christmas.

Msgr. Renato P. Mayugba, DD, Auxiliary Bishop of Lingayen-Dagupan and the Archdiocesan BEC Coordinator, celebrated the Mass. In his homily, Msgr. Renato P. Mayugba said that it was very appropriate that the parish is celebrating the BEC Day on the Feast of St. Stephen, the first Christian Martyr for the faith. He further said that the Basic Ecclesial Communities should emulate the first Christian Communities in their prayer life, and  care and concern for one another. 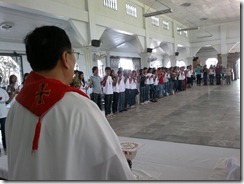 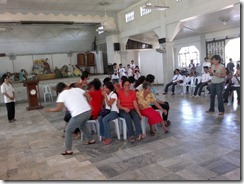 The Cenacles of the Divine Mercy and BEC members having fun! 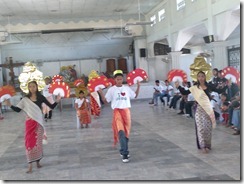 27 December 2011 – San Fabian, Pangasinan. The nativity scene and the christmas parol of the Parish of St. Fabian, Pope and Martyr, has been featured in the Sunday Punch, a weekly Provincial Newspaper in Pangasinan. The following is its featured article:

UNIQUE NATIVITY-CHRISTMAS PAROL–Visitors and devotees are trooping to the San Fabian Parish Church for a glimpse of the Nativity scene re-created in the middle of a giant Christmas parol. The artistic modern creation by Josie Garcia, with the help of the parishioners, is now on display inside the church. The Blessed Virgin Mary is seen hoisting the newborn Jesus in adoration while St. Joseph reaches out to them.

PRAYER FOR THE THEOLOGY SEMINARY

Your blessings are beyond measure

And your love is constant and pure.

Bless our vision of a theology seminary

For the Church in Lingayen Dagupan,

Bless the work we have begun

Bless every priest and seminarian.

I promise to set aside everyday

An amount for the seminary

I will not get tired of giving

Until this vision is fulfilled

I will encourage others to give

I will beg others to pray.

I will not stop dreaming and hoping

That you loving God will make it happen.

Use me to make it happen.

May we have the new seminary,

When we celebrate our golden!

9 December 2011 – Dagupan City. “We need priests because we need Christ.” Hundreds of parishioners from the different parishes of the Archdiocese 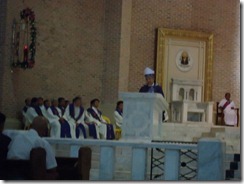 The  Fund Raising drive will provide for the initial fund for the construction of the Theology seminary.  It will focus on the “Libro na Panangaro para Seminario”. The initial drive is also an awareness drive regarding the construction of the new Theologate. It will tap the majority of the faithful of ALL the parishes, chaplaincies, pastoral stations and schools of the Archdiocese. 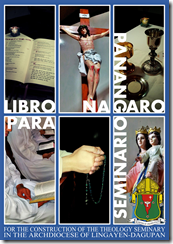 Each parish/chaplaincy/pastoral station/school shall be given a common “book”, “Libro na Panangaro para Seminario”. The book will contain the names, address, amount given and signature of the donor. The book after the campaign will be placed in the cornerstone of the new building. There is no fixed amount to be donated. The book will be offered during the 16 February 2012 Eucharistic Celebration opening the Golden Jubilee celebration of ALD. The archdiocese will celebrate its golden jubilee on 16 February 2013.

It is an appeal to history and posterity: that each one with their donation shall become part of the history of the seminary. The donors will be enshrined in the cornerstone.
“It is not the amount that matters. It is the love we have for God, for the church that matters the most”, Archbishop Soc further said in his homily.
A further more widespread fund drive will follow after the initial drive, “Libro na Panangaro para Seminario”.

Archbishop Soc said we need priests because we need Christ. We need the seminary to form priests who will give us Christ!

A Legacy that will transcend our lifetime.

The Archbishop encouraged the people to share and to help build the theology seminary. “It is an opportunity given to you today to become part of the construction of the seminary. It is not always that we are given this opportunity. It is  a legacy that will transcend our lifetime. We will all pass away, but the seminary will remain beyond our lifetime, forming priests of Pangasinan  who will be  ever ready to give Christ to you!”

The Archdiocese of Lingayen Dagupan has assigned a lot in Barangay Palapad, San Fabian, Pangasinan measuring twenty seven thousand square meters as the future site of the theology seminary.
A pious lady architect who has been a recipient of the papal award Pro Ecclesia et Pontifice, Architect Susana Castillo, has made the design for the future seminary. Once completed, it will be able to accommodate eighty seminarians who can also take their classes in theology within the same compound.
The Archdiocese of Lingayen-Dagupan has already two formation houses for future priests: the Mary Help of Christians High School Seminary in Binmaley, Pangasinan and the Mary Help of Christians College Seminary in Bonuan Gueset, Dagupan City.

The Archdiocese of Lingayen-Dagupan comprises sixteen municipalities and two cities including the capital town of the Province of Pangasinan. It has a Catholic population of one million two hundred thousand composed of thirty three parishes. There are only fifty nine diocesan priests and twelve religious priests ministering to the huge Catholic population.

As of the year 2011, there are one hundred three high school seminarians, thirty-two seminarians in philosophy and eighteen seminarians in theology. The nearest theology seminary is three hundred kilometers away from the archdiocese in Vigan City, the Immaculate Conception School of Theology.

The blessing of the statues of the patron saints of the different parishes of the Archdiocese of Lingayen-Dagupan took place before the eucharistic celebration. The slight drizzle could not hold back the enthusiasm of the parishioners from the different parishes to witness the blessing of the statues of their patron saints. The statues were put on the perimeter fence of the St John Cathedral. The Archdiocese of Lingayen-Dagupan has 36 parishes, chaplainces and pastoral stations. 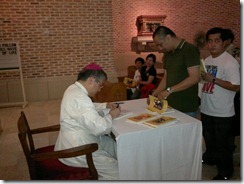 After the mass, the book of Archbishop Soc entitled “Stewards of Christ” was launched. The book is a collection of homilies, talks and conferences since he arrived in the Archdiocese of Lingayen-Dagupan in 2009. The Archdiocese of Lingayen-Dagupan has embarked on a Stewardship Program since then involving the different parishes, chaplainces, pastoral stations and schools of the archdiocese. Archbishop Soc has consistently been giving stewardship talks to groups of lay leaders who he calls the “School of Lay Leaders”. These lay leaders have been attending lectures and conferences given by Archbishop Soc himself since 2010.

Archbishop Soc personally signed the books bought after the mass. The sale of the books will go to the construction of the theology seminary. 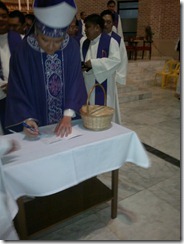 The Archdiocese is raising the seed funds necessary for the start of the seminary construction project from the Catholic lay faithful and clergy of the Archdiocese of Lingayen Dagupan. There is a remarkable enthusiasm among of the Catholic faithful with regard to the project. The fund drive hopes to raise five million pesos (PhP5M) from the Catholic faithful as the initial fund for the project. Obviously and understandably, this seed money will not be enough. The fund drive will need  to raise fifty million pesos (PhP50M) for the completion of the project. Archbishop Soc said, “Every donation no matter how small is a gift for the future of the Church. “
To kick off the fund drive, the clergy of the Archdiocese led by the Archbishop were the first to sign the “Libro na Panangaro para Seminario”. The Olupan na Laiko na Arkidiosis na Lingayen-Dagupan (ONLA) facilitated the initial signing and collection of donations after the mass. 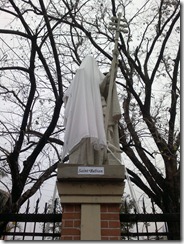 The statue of St. Fabian, Pope and Martyr, before its blessing and unveiling. The statue is located at the corner of Burgos and Jovellanos Sts., Dagupan City. 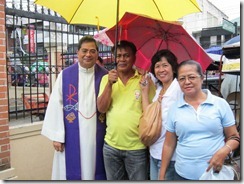