14 October 2009. Five days after the Great Flood that inundated 90% of the province of Pangasinan, including the 28 parishes and chaplaincies of the Archdiocese of Lingayen-Dagupan, the Archdiocesan Social Action (ASAP) has started its relief operations. The Mary Help of Christians College Seminary in Bonuan Gueset, Dagupan City has been transformed into its Center for Relief Operations. 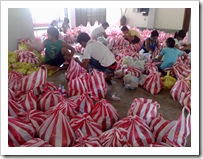 Since 10 October 2009, Sunday, relief goods have been pouring in for the relief operations in the Archdiocese. They have not yet stopped. Most of these relief goods and packages came from individuals and groups from Manila, and from Bataan. Msgr. Socrates B. Villegas, DD, the in-coming Archbishop of Lingayen-Dagupan, has issued an appeal for the relief needs of the parishes that were greatly affected by the floodwaters which submerged Pangasinan for four days.

The Community of the Shrine of Mary, Queen of Peace (Our Lady of EDSA) or more popularly called as the EDSA Shrine, was one of the very first groups to give to the Archdiocese. The EDSA shrine community responded very generously and selflessly to the appeal of Archbishop Socrates Villegas. They sent in four truckloads of relief goods which included rice, canned goods, bottled water, clothes and slippers, noodles and more than a thousand pieces of bread.

Other groups who sent are the Simbahang Lingkod ng Bayan of Ateneo, the Order of Malta, Ms. Mila Drilon and Mr. Larry Murillo who sent in 200 sacks of rice.

The Diocese of Balanga where Msgr. Socrates B. Villegas is presently the ordinary donated one truck load of relief goods. Ms. Elvira Go and company sent in their relief goods on 11 October, Sunday. She personally accompanied the truck that brought in the goods and made a personal visit to the flooded areas especially in the Parish of St. Fabian, Pope and Martyr.

Msgr. Socrates B. Villegas, DD, has opened an account where donations can be sent in for the relief and rehabilitation of the most distressed areas in the archdiocese. Cash donations can be deposited with Bank of Philippine Islands (BPI) Account No. 8081-0001-32 under the account name “Archdiocese of Lingayen-Dagupan Calamity Fund” for peso deposits only. The Archdiocesan Social Action Apostolate is already making plans and programs to help the farmers whose crops were destroyed by the flood waters as well as for the rehabilitation of those who lost their houses.

The Archdiocesan Social Action Apostolate (ASAP) through the different ASAP parishes has reached out to almost 10,000 afflicted families of the Archdiocese. These massive relief efforts would not have been possible without the selfless and generous hearts of donors. Truly, God cares! And He cares through people with loving and caring hearts!