It was on October 9, Friday dawn when floodwaters in 32 towns and three cities in Pangasinan were initially seen rising fast due to the swelling of major rivers, notably the Agno River, initially from the continuous rains unleashed by Typhoon Pepeng. It was aggravated when the San Roque Multi-purpose Project 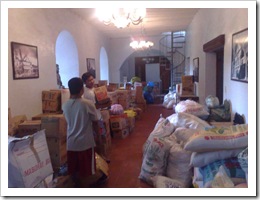 (SRMP), reputed to be highest rock-fill dam in the south east Asian region and the second highest in Asia, began spilling its excess water at the lower stream of the Agno River through its six spillway gates by 26 meters at 3 a.m. (from the Sunday Punch) By the end of the day the 90% of the province was inundated by flood waters causing untold pain and suffering to our people.

The Parish of St. Fabian, Pope and Martyr, (San Fabian, Pangasinan), of the Archdiocese of Lingayen-Dagupan was not spared by the calamity that devastated Pangasinan. The Bued River rampaged through San Fabian and eroded large tracks of land, including 25 houses erected in Barangay Binday. The floodwaters submerged houses in some barangays, particularly in Brgys. Lekep-Butao, Taculit, Angio, Longos Central, Parac-Parac and Proper. Many did not expect the waters to rise so fast. In some areas, their houses were inundated in less than thirty minutes. Many had to spend more than 24 hours, without food and rest, on the rooftops of their houses. The rampaging waters made rescue efforts more difficult.

About 60% of San Fabian was underwater. There were thousands who were affected, that the Evacuation Center of the town was filled. It could not accommodate all of them. The woes of the evacuees were compounded when floodwaters reached the only evacuation center of the town. The parish opened and welcomed the hundreds of evacuees who filled up the parish Church, the Parish Center and the Catholic School. 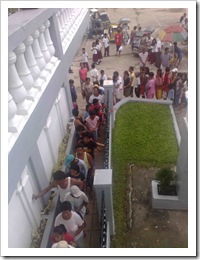 We have been struck by a calamity, and wounded by the onslaught of devastating floodwaters. But we also have been loved much by so many people who have gone out of their way to help us in our need. We believe we are blessed, in spite of this tragedy that had befallen us. We are blessed because there are people who have shown so much love and generosity. You are here in our hearts, and with you we will rise. We will prevail. We shall overcome.

To the Parish of St. John the Baptist, Pinaglabanan, San Juan City, our heartfelt and sincere gratitude to you all. To Fr. Frank Ungria, Jr., the parish priest, a native son of San Fabian, to his Parochial vicar, Fr. Mike Kalaw, to the members of the PPC and to all of you: MARAMING SALAMAT PO sa TULONG at PAGMAMAHAL! We believe that God in His unfathomable mercy will reward you a hundredfold! 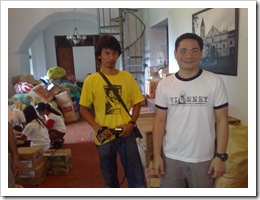 Fr. Mike Kalaw, the Parochial Vicar of St. John the Baptist with the brother of Fr. Frank Ungria, Jr., the parish priest. 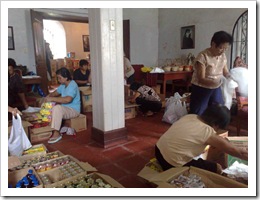 The members of the Mother Butler Guild of San Fabian Parish helped in repacking the truckload of relief goods.