On September 8, 2009, the Holy See announced that the Holy Father, Pope Benedict XVI has accepted the resignation of Archbishop Oscar V. Cruz, from the pastoral government of the Archdiocese of Lingayen-Dagupan in conformity with the norm of Canon Law. At the same time the Holy Father has appointed Archbishop Socrates B. Villegas, until then Bishop of the Diocese of Balanga (Bataan) to succeed Archbishop Cruz.

1. Why the change in leadership?

The above change in leadership is explained by a provision of the Second Vatican Council which earnestly requests diocesan bishops to resign from their office, if on account of advanced age or form any grace cause they become less able to carry out their duties (1). In implementing this provision of the Council, the code of Canon Law asks diocesan bishops to tender their resignation upon completing their seventy fifth year (2).

2. Who appoints and accepts the resignation of bishops?

3. What becomes of the bishop who resigned?

A bishop whose resignation from office has been accepted acquire the title "emeritus" of his diocese. (5) If he so wishes he may have residence in the diocese. (6) Furthermore, the diocese which he served has the obligation to provide for the upkeep of a bishop who has resigned. (7) 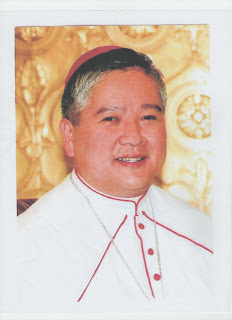 4. When does the new bishop assume his new office?

One who is promoted a bishop, in this case the succeeding bishop, Archbishop Villegas, cannot yet exercise the office entrusted to him until he has taken canonical possession of the diocese. (8) "Canonical possession," popularly called "installation", denotes the formal act by which the bishop assumes full governance of the diocese. A bishop who is already consecrated must take possession within two (2) months after receiving the notice of his appointment.

5. How does the new bishop take canonical possession of his diocese?

A bishop takes canonical possession of his diocese when he shows the apostolic letter of his appointment to the diocesan Board of Consultors, in the presence of the chancellor of the curia who makes a record of the fact. The canonical possessionmust take place in the diocese. (10) and the law strongly recommends that it be performed with a liturgical act in the cathedral church, in the presence of the clergy and the people. (11)


As  the pastoral office of bishops is so important and onerous,  diocesan bishops and others whose juridical position corresponds to theirs are earnestly requested to resign from their office if on  account  of advanced age or from any other grave cause they become less able to carry out their duties.  This they should do on their own initiative  or  when  invited to do so by the competent authority.  If the competent authority accepts the resignation it will make provision for the suitable support of those who have retired and for the special rights to be accorded to them.


A diocesan Bishop who has completed his seventy-fifth year of age is requested to offer his resignation from office to the Supreme Pontiff, who, taking all the circumstances into account, will make provision accordingly.


A Bishop whose resignation from office has been accepted, acquires the title 'emeritus' of his diocese. If he so wishes, he may have a residence in the diocese unless, because of special circumstances in certain cases, the Apostolic See provides otherwise.


The Episcopal Conference must ensure that suitable and worthy provision is made for the upkeep of a Bishop who has resigned, bearing in mind the primary obligation which falls on the diocese which he served.


A person who is promoted to the episcopate cannot become involved in the exercise of the office entrusted to him before he has taken canonical possession of the diocese. However, he is able to exercise offices which he already held in the same diocese at the time of his promotion, without prejudice to can. 409 §2


Unless he is lawfully impeded, one who is not already consecrated a Bishop and is now promoted to the office of diocesan Bishop, must take canonical possession of his diocese within four months of receiving the apostolic letters. If he is already consecrated, he must take possession within two months of receiving the apostolic letters.


A Bishop takes canonical possession of his diocese when, personally or by proxy, he shows the apostolic letters to the college of consultors, in the presence of the chancellor of the curia, who makes a record of the fact. This must take place within the diocese. In dioceses which are newly established he takes possession when he communicates the same letters to the clergy and the people in the cathedral church, with the senior of the priests present making a record of the fact.


It is strongly recommended that the taking of canonical possession be performed with a liturgical act in the cathedral church, in the presence of the clergy and the people