Stations of the Cross at Lipit-Inmalog Sur

7 April, Holy Tuesday – San Fabian. The meditation of the Stations of the Cross in Brgy. Lipit going up to Brgy. Inmalog Sur has been held in the Parish of St. Fabian, Pope and Martyr

since 2004. The place is a hilly, upland route of about two kilometers. The fourteen stations are scattered along the main road. Before the Inmalog-Lipit boundary, it turns right for the12th and 13th stations. The 14th station is located at the peak of Inmalog Sur overlooking the plains and seas of San Fabian.

The Parish Youth Apostolate Committee (PYAC) provided the tableau for each of the 14 stations. They portrayed the

scenes in their costumes which were prepared by them. The youth of the parish started portraying the different scenes of the stations of the cross in 2006.

While the faithful were meditating from one station to another, confessions were being heard by Fr. Oliver E. Mendoza, the parish priest. Bro. Estephen Espinoza and Bro. Tony Supremido led the meditations and the prayers.

The Stations of the Cross of the Divine Mercy or “Say Estasyon na Krus na Madibinon Panangasi” was used as the guide for the meditations and prayers.

The Stations of the Cross started at 3 o'clock in the afternoon after the whole assembly prayed the Chaplet of the Divine Mercy. A mass was later celebrated at the Inmalog Sur boundary site between Lipit and Inmalog Sur, after the stations of the cross. It was celebrated by Fr. Oliver E. Mendoza. 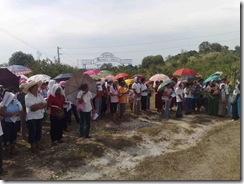 The faithful at the First Station at Brgy. Lipit. The 12th Station: “Jesus dies on the cross” 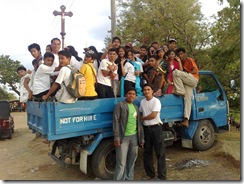