11 June 2011 – Dagupan City. The Biblical Apostolate of the Archdiocese of Lingayen-Dagupan in cooperation with the Episcopal Commission on Biblical Apostolate (ECBA) and the Philippine Bible Society (PBS)  recently launched the Pangasinan Handwritten Bible last 11 June 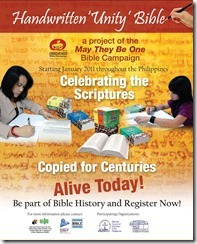 The handwritten Bible has been conceptualized to unite Filipinos in a “Bayanihan” effort with other Christian groups toward national transformation through God’s Word. Lingayen-Dagupan Auxiliary Bishop Renato Mayugba, Vice Chairman of ECBA and Chairman of the John Paul I Biblical Center of Northern Luzon has presented the context of the first handwritten Bible to the Catholic Bishops during the 101st Bishops Plenary Assembly at the Pope Pius XII Center in UN Avenue, Manila in July 2010.

Besides Bishop Renato P. Mayugba, the launching was attended by Archbishop Socrates B. Villegas, the Archbishop of Lingayen-Dagupan, Msgr. Jesus A. Cabrera, Bishop-Emeritus of Alaminos, civil and religious leaders and representatives from the different Protestant denominations.

The Handwritten Unity Bible (HUB)  will need around 35,000 individuals to write each verse of the Bible in English and the same number for the Pangasinan language.

A total of six or seven sessions will be conducted until the Bible is completed. The manuscripts are expected to be finished by 2013 and will be reproduced for distribution, while the original copies will be stored in a museum in Manila for posterity.

“The Handwritten Bible will include interspersed Deuterocanonical books,” organizers said.

The 35,656 verses from 78 books of the bible will be written by hand by representatives from various sectors such as the Church, urban/rural poor, OFWs, youth, farmers, government offices; schools, indigenous people, and the fisher folks.

The project was launched in Dagupan City with a motorcade on 10 June 2001, a day before the formal launching,  from the St. Therese Church in Rizal St. to the Sanctuario de San Juan Evangelista where the transcription took place.

A Bible Enthronement celebrated through a Bibliodrama by the ALD Biblical Apostolate opened the formal campaign.

The Handwritten Unity Bible will also be launched in the other three Vicariates of the Archdiocese of Lingayen-Dagupan.

(Ms. Shirley Tersol is a regular contributor to the website. She is a member of the Union of Prayers for Vocations  (UPV) as well as of the Ministry of Social Action (MISA) of the parish. She is at present the teacher-in-charge of Jose N. Juguilon Elementary School, Colisao, San Fabian, Pangasinan)
Posted by frbarats at 9:16 PM