12 June 2009 - Dagupan City. The celebration of the 111th anniversary of the independence of the Philippines was celebrated in the city of Dagupan with a Prayer Rally against Con-Ass.

Msgr. Ocar V. Cruz, DD said, “House Resolution 1109 stands not only as its big and clear formal ignominy but shall also remain as its gross official disrepute in the annals of its history. Its much calculated yet obviously devious move in favor of Charter Change via its solitary call as a Constituent Assembly, only demonstrates its utter subservience to the Executive Department – apparently for the right price. With such a distinctly base and infamous resolve, the Upper House of Congress en contra thereto now appears standing way up there as it possibly can.”

In his letter announcing the holding of the Prayer Rally, Archbishop Cruz stated the reason for the Prayer Rally. “When expressedly called for by no less than CBCP itself, to register our expressed yet peaceful and prayerfully group dissent towards the morally objectionable and ethically offensive House Resolution 1109 about the anti-Constitutional holding of a CON-ASS eventually leading to the likewise anti-Constitutional term extension of the presumed President of the land – long since well known for serious graft and corrupt practices – we cannot but respond accordingly.”

The massive Prayer Rally was held at the Dagupan City Astrodome, and attended by more than5,000 people from various groups and different parishes of the Archdiocese. More

than a hundred parishioners from San Fabian joined the protest action.

The program was opened by a prayer of Rev. Fr. Julius Cuison, the Spiritual Director of the Mary Help of Christians College Seminary. The students of the Malasiqui Catholic School presented a haunting presentation depicting the various social ills and governmental corruption.

The resource speaker was Atty. Feliciano Bautista, the National President of the Integrated Bar of the Philippines. Atty. Feliciano Bautista is from the province of Pangasinan. He explained the implications and the unconstitutionality of the House of Representatives convening iteself into a Constitutional Assembly without the participation of the Senate in changing the Constitution. He answered several questions from the audie061220091167.jpgnce during the open forum.

Former Speaker Jose de Venecia spoke after the forum. De Venecia, once a staunch advocate of Charter change said he has turned against it because present efforts were meant to “perpetuate President Arroyo in power.” He urged the Pangasinenses to fight Con-Ass and said that Pangasinan shall take this lead in the North.

A Holy Mass with Archbishop Oscar V. Cruz, DD as the main celebrant together Msgr. Renato P. Mayugba, DD, the Auxiliary Bishop, and the clergy of the Archdiocese of Lingayen-Dagupan was celebrated. A singing of the “Bayan Ko” was led by the clergy after the mass. The whole assembly sang the “Bayan Ko” with raised hands and clenched fist. “Bayan Ko” was the song of protest during the Martial Law years. The rally was interrupted many times by shouts of “Con Ass, AGCO!” and “Con Ass ni Gloria, AGCO!”

Mr. Tony Liwag and Mr. Dong Jajardo hosted the program. The Archdiocesan Social Action Apostolate coordinated the whole affair. The Prayer Rally was dubbed as “Bayan Ko, Mahal Ko. Con-Ass, AGCO!” AGCO has been used as a by-word in the advocacies of the Archdiocese. It means “I do not like” “I am against”. AGCO is also a broad coalition of various sectors of the society which is led by the Archdiocese. 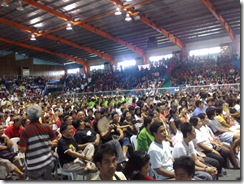 The huge crowd of more than 5,000 filled the Dagupan City Astrodome to protest Con-Ass. 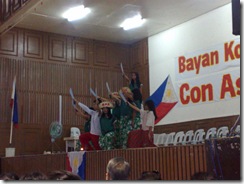 The students of the Malasiqui Catholic School performing a haunting depiction of the ills of society brought about by unbridled greed and corruption in government. 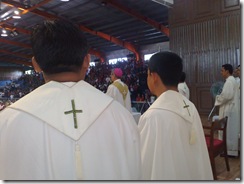 Archbishop Oscar V. Cruz, DD and the clergy during the mass.