September 8, 2011- San Fabian, Pangasinan. Due to the recent onslaught of Typhoon “Mina”, five  houses were lost during the devastation of the storm at barangay Binday, San Fabian, Pangasinan. Three  houses were abandoned including one  house which was left precipitously  hanging by the river bank. The abandoned houses are expected  to be lost anytime

when raging waters would rush in again due to the heavy rainfall.

Loss of properties and livelihood

Two  hectares of rice lands were lost due to the rampaging waters of Bued River. They were eroded and carried along by the raging waters that flowed from the river. These lands were already  planted with rice palay ready to be  harvested by the next month. The residents were not only deprived of their shelter and properties  but also their source of livelihood and living.

A portion of irrigation canal which supplies water to the farmlands of five (5) barangays was also lost. The barangays greatly affected are: Baragays  Binday, Anonang, Cabaruan, Aramal, and Angio. Unless the irrigation canals will be rebuilt soon, the palays will die due to the lack of supply of water.

A dialogue held at the Parish Center participated in by various stakeholders, namely, the barangay officials, the farmers, the local municipal agricultural office, and church leaders. They  identified some immediate major concerns: the construction of the irrigation canal that would link it to the undamaged canals bringing water to  the five (5) barangays;  and to relocate the displaced families who lost their lands and homes. Mentioned also was the aggravating circumstance that brought about the massive erosion and destruction of the river banks of the Bued River: unabated, unregulated and unsystematic quarrying operations in the area.

In 2009, at the height of Typhoon Pepeng, 21 houses in Binday South were destroyed and washed away by the rampagi 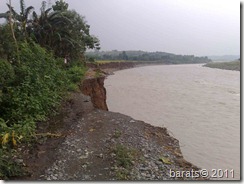 ng waters of Bued River. (please read “Quarrying Activities cause Massive Erosion in San Fabian – ed) The irrigation canals supplying the much needed water to the five barangays were also destroyed at that time. During that year, the harvests of the farmers were greatly affected by the lack of water supply due to the erosion of the irrigation canals.

There is one thing that they have not lost, though. It is  their faith in God. When their properties were dissipating like the wind,  they could not  but turn their eyes above, trusting in God’s Mercy. Their faith has assured them that everything is not lost. God is there who assures them of comfort and protection.

The Church came to provide hope during their moments of  helplessness. The Parish of St. Fabian , Pope and Martyr, through Caritas Lingayen-Dagupan, has organized a housing program, the Holy Family Village Housing Project. The project is for the affected families. (please read “Housing Program launched for Typhoon Pepeng Victims” – ed.) 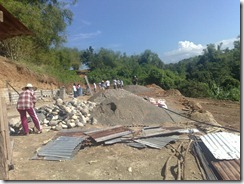 The approach of the church is holistic. Composite to the shelter which the church will offer them is their spiritual formation nourished by their monthly Eucharistic celebrations and weekly prayer meetings and bible sharing. They will be given livelihood programs through skills development for their daily living. Now, they are part of rebuilding their dreams. They are soon to live in their own houses fruit of their labor and sweat of their brow.