San Fabian, Pangasinan – 25 May 2011. In a recent survey conducted by Social Weather Stations, some 20.5 percent of Filipinos or about 4.1 million families are going hungry, an increase almost seven points above the 12-year average of 13.8 percent. Also, 51 percent or some 10.4 million families are considering themselves "mahirap" or poor – two points up from November’s 49 percent, according to a new survey by pollster Social Weather Stations.

The problem of malnutrition is also a persistent problem closely connected with the problem of hunger and poverty. The malnutrition prevalence among children in the Philippines has remained alarmingly high in the last 10 years. Results of the 7th National Nutrition Survey conducted by Food and Nutrition Research Institute in 2008 showed that there are still about 3 out of 10 children ages 0 to 10 years who are underweight (26.2% for children ages 0-5 years old and 25.6% prevalence for 6-10 years old). About the same proportion (27.9% and 33.1% respectively) are under height which indicates chronic or long-standing malnutrition.

In response to the prevailing problem of hunger and malnutrition among the children aging 6 months to 6 years old, the Archdiocese of Lingayen-Dagupan Ministry of Social Action (MISA) in partnership with HAPAG-ASA, an integrated Nutrition Program connected with the Church based Pondo ng Pinoy of the Archdiocese of Manila and Assisi Foundation and Feed the Children Philippines, embarked on a holistic feeding program in some selected parishes in the Archdiocese of Lingayen-Dagupan. These parishes are the pilot parishes for the feeding program of the Ministry of Social Action.

The Parish of St. Fabian, Pope and Martyr is one of the seven parishes involved in the program. The parish has chosen Brgy. Longos Parac-Parac as its pilot barangay. The others are the St. John the Evangelist, Dagupan City, Annunciation of the Lord in Bonuan Gueset, Dagupan City, St. Ildephonse, Malasiqui, Holy Cross, Laoac, St. Dominic, San Carlos and Epiphany of our Lord, Lingayen, Pangasinan. 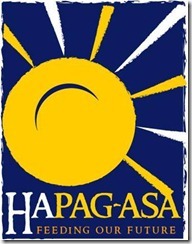 The Hapag-Asa Integrated Feeding Program was launched in July 2006 by Archbishop Cardinal Gaudencio Rosales. It aims to develop the culture of SHARING and LOVING as demonstrated in the Miracle of the Multiplication of loaves and fish (Mt. 14:13-21) to children, their families and communities; to reduce malnutrition prevalence rate among 0 to 12 years old children and to improve capacity of parents to care and provide for basic needs of their children.

The program feeds 6 months to 12 year old undernourished children in the community once a day, five days a week for six months. Each meal is enriched with Vitamins and Minerals through the addition of Vitameal a mixture of rice and lentil.

The Parish of St. Fabian, Pope and Martyr, has chosen Barangay Longos Parac-Parac as its pilot barangays for the program. Rev. Fr. Oliver E. Mendoza, parish priest of St Fabian said that that there are 118 children and 66 pregnant and lactating mothers who are enrolled in the feeding program in Brgy. Longos Parac-Parac.

Bro. Antonio Supremido, the Parish Program Coodinator, said that the children were first weighed and their height measured before they were enrolled in the Hapag-Asa program.

He explained that the program focuses on 6 months to 12 years old undernourished children and underweight pregnant and lactating women. “The program gives priority to younger age group – 6 years old and below”, he said.

He explained that the program provides one meal a day, five days a week for six months or a total of 120 days. The food can be complete meal or heavy snacks. The workforce is provided by the parents of the enrolled children.

Ms. Michelle A. Vallejos, the Barangay Program Coordinator, said, “The supplemental feeding is just one of the components of the program.”

She said that two other components which are vital to the success of the program are the “Parents’ Education Classes” and the “Livelihood and Skills Training”. The classes are scheduled every Sunday afternoon, while the feeding component is scheduled at 4 o’clock in the afternoon, from Monday to Friday. The seminars will be on affective parenting, livelihood and skills training; health and nutrition; values formation; and responsible parenthood to ensure that the parents can take care of their children even after the feeding.

The Hapag-Asa Integrated Feeding Program has been implemented in 836 parishes all over the Philippines as of November 2010. It has served 128,104 children.

The Parish of St. Fabian, Pope and Martyr, will formally launched the program this coming June 2011.

(Shirley Tersol is a member of the Parish of St. Fabian Ministry of Social Action. She is also at present the Teacher-in-Charge of Jose N. Juguilon Elementary School, Colisao, San Fabian, Pangasinan).