Father Soc celebrates Mass for Forgiveness of Sins in Binday 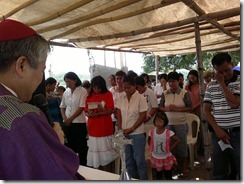 13 October 2011 – Binday, San Fabian, Pangasinan. There was a festive atmosphere filled with joyful songs the last time Archbishop Socrates B. Villegas, the Archbishop of Lingayen-Dagupan, celebrated mass with the people of Binday. During that time, Father Soc blessed the chapel rebuilt by the people after it was destroyed by a typhoon. The chapel was blessed in December 2009.

Today, the people of Binday were once again with Father Soc in a celebration of the Eucharist. But in a different situation. The mass was celebrated at the river bank where three abandoned houses were located, and  five other houses used to stand. Rampaging waters swept the houses during the height of Typhoon Minda last August.

The families who had lost their homes dur 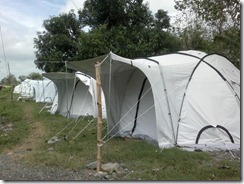 ing the last Typhoon had been living in tents provided by the Rotary Club of San Fabian.

Mass for Forgiveness of Sins

The people celebrated today a Mass for Forgiveness of Sins. In his homily, Archbishop Soc reminded the people about their responsibility in caring for nature. He told them that the mountains, the rivers and the trees were all created by God before man was created.

“They are then our older siblings,” he said. “We should respect and care for them. They are our best friends forever. On the other hand, we should remain also their friends forever.”
He reminded the people again that instead of remaining best friend to nature, we have destroyed and raped her. The Archbishop then led the people in asking for forgiveness for the sins of destroying God’s creation, and moving them to a change of heart: to care and nourish creation.

Regional Irrigation Manager John N. Celeste attended the Mass. The Region I National Irrigation Administration (NIA) was very categorical in its position that the  unregulated and unsystematic quarrying operations were a major factor in the destruction of the Bued River System. Barangay Binday which has received the brunt of nature’s destructive forces is located along the Bued River.

On 11 October 2011, the Regional Office No. 1 of the National Irrigation Administration stated their formal position on the effect of quarrying along the Bued River downstream of San Fabian Dam. The paper states that “to stop further the lowering of riverbed, no quarrying is allowed downstream of the dam. This is to allow the river to negate the effect of retrogression and extensive quarrying i.e., to replenish the extracted materials downstream of the dam p to the mouth of the river until such time that a gentler and stable slope shall have been attained.”

This position is contrary to the position of the Mines and Geosciences Bureau (MGB) In a statement made in a local TV station, MGB said that  the quarrying done in Bued River System is not a factor in its present condition and in the erosion of its river banks, including the houses that were washed away.

“Bless those who bless You; curse those who curse You” 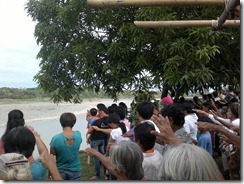 With right hands stretched out over Bued River, Archbishop Soc led the people in prayer. “Bless those who bless the river, curse those who destroy it,” he prayed.

Police Inspector Amor Somine led the people in praying the Prayer of Commitment. “Our world’s picture is reflected in our little corner in Pangasinan and particularly in our Bued River System. Today, we commit ourselves personally and as a community, to contribute our energies and resources towards its healing by preserving what is left of its beauty and goodness and restoring the beauty, freshness and goodness that have been destroyed." 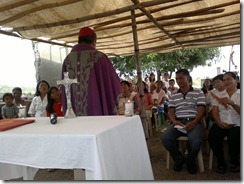 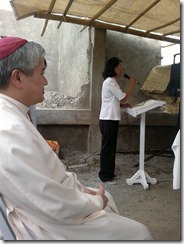